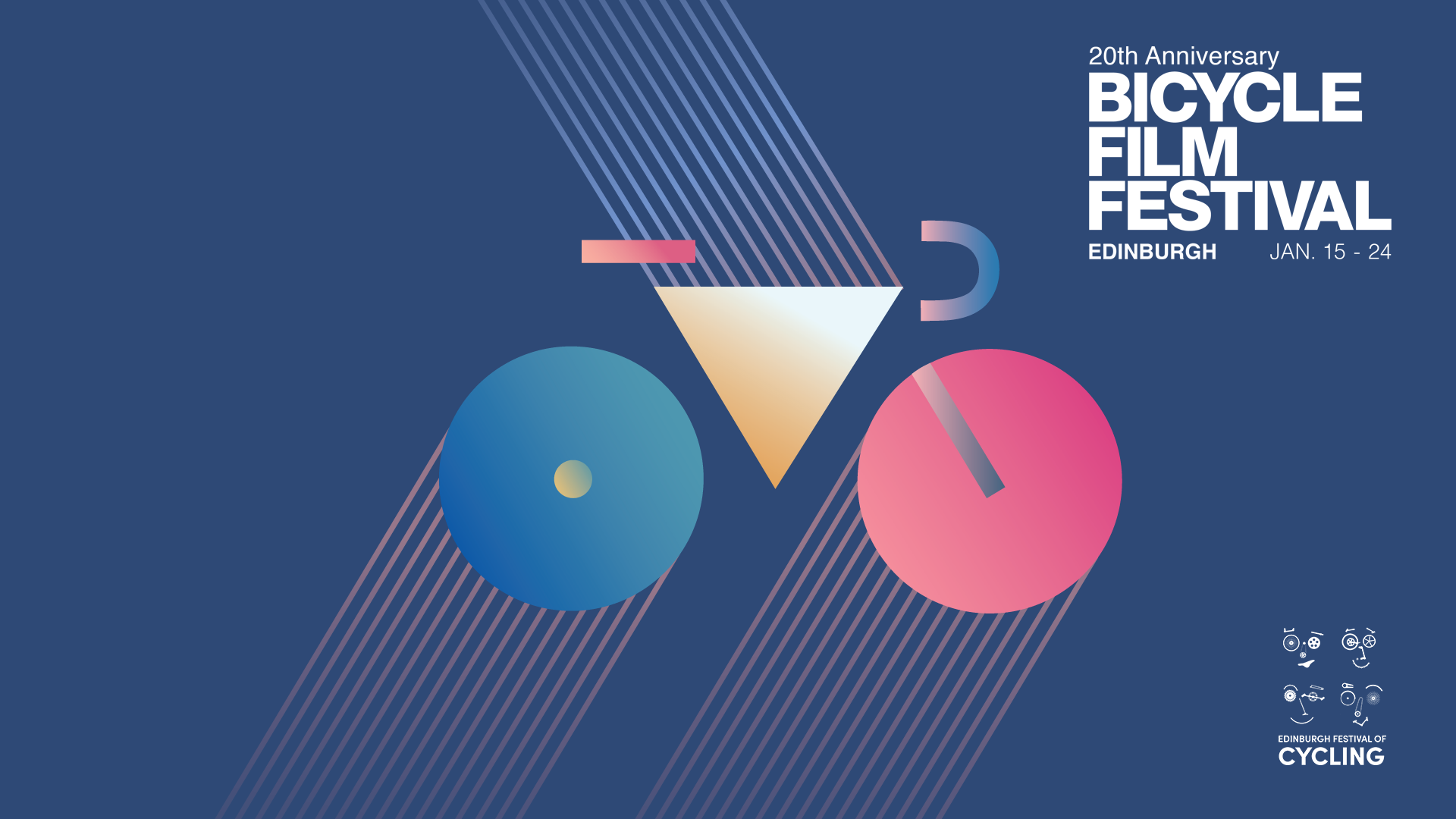 The 20th Anniversary of Bicycle Film Festival is going virtual.
Hosted by the Edinburgh Festival of Cycling.

Bicycle Film Festival has been celebrating bicycles through art, film and music for the last 20 years. The physical BFF spanned the world in over 90 cities worldwide to an audience of over one million people. The festival has an incredible history of working with the most important artists, filmmakers, venues, and institutions around the world.

BFF Edinburgh is presenting an international selection of short films. The Select Shorts Program will appeal to a wide audience from film connoisseurs to avid cyclists and everything in between. Let the BFF curated collection of short films take you on a journey around the world as we learn about a charismatic Ghanian immigrant in Amsterdam who teaches refugee adult women to ride bikes – experience a birds-eye view of a BLM bicycle protest ride from New York to DC – feel the anguish of a father’s loss – the struggle of a young woman and her bike in Iran – meet a legend in cycling breaking barriers for women’s cycling.

How it works, the tickets are priced on a sliding scale at $12.61 (about £9.34), $17.92 (about £13.28) and $23.23 (about £17.22) including fees. All prices are for the same program, you choose how much you want to pay. Once you have your tickets you are able to stream the package of films at any time you want and as often as you want within the period of the festival. If you have any technical question about how the streaming service works, after you have bought a ticket, these should be directed to support@boldtypetickets.com who are best placed to answer your questions.

Is it age-appropriate for kids? Every family is different. There is no violent images, sex, or swear words. However, it is not programmed for children. There is some adult subject matter and dark subject matter discussed such as genocide and how cycling helped communities recover. But mostly, it may be challenging to keep their attention if they are really young.

The Edinburgh Festival of Cycling (EdFoC) is a celebration of all aspects of cycling in and around the City of Edinburgh, including travel, leisure, adventure, transport, sport, personal development. Recognising cycling’s importance for encouraging social inclusion and economic development reducing ill health and pollution and for making places. EdFoC aims to challenge people’s perception of what cycling is and to put Edinburgh on the map as an international cycling destination

About Bicycle Film Festival:
Founded in New York BFF has been celebrating bicycles through art, film and music for the last 20 years. The physical BFF spanned the world in up to 100 cities to an audience of over one million people. The international locales included Paris, London, Tokyo, Shanghai, Moscow, Mexico City, Capetown and Istanbul and more at some of the most important venues such as Sydney Opera House and the Barbican or an old factory in Zurich. The Subcultures of cycling have shared equal billing with the most exciting innovators in music, art, design and film. Participants have included: Erykah Badu, Karl Lagerfeld, Francesco Clemente, Shepard Fairey, Albert Maysles, Michel Gondry, Spike Jonze, Alex Katz, Kaws, Mike Mills, Paul Smith, the Neistat Brothers, Tom Sachs, Ridley Scott, Kiki Smith, Swoon, and Ai Weiwei.

Brendt Barbur
In 2001, Barbur was compelled to start the festival after being hit by a bus while riding his bike in New York. He turned this negative experience into a positive one. He has since curated art exhibitions internationally and produced films. Barbur has also produced content for Puma, Barcardi, and Red Bull. He has been profiled by the BBC, The Wall Street Journal, GQ, NY Times, The Guardian and many others. Brendt has a strong focus on community and arts on a local and global scale, with a view on sustainability. Having created a social phenomenon with over 1 million attendees to date, he has influenced the transformation of cities worldwide and encouraged environmentalism through these cultural events. This festival is a celebration of way a life––not just entertainment.

“In a year of a global pandemic, economic strife, violent acts by racist groups, a contentious election period the bicycle boom worldwide is optimistic news to celebrate. We hope to offer a positive respite from all of this for people.” BFF Founding Director, Brendt Barbur.