We are pleased to announce that this year the Edinburgh Festival of Cycling will have a new transport partner, Urban Arrow.

There is more to running a festival than just turning up at a few events, there is always lots of stuff to move about, such as the 10,000 programmes which are about to be printed. Over the last couple of years, this has been something of a logistical headache, although one made easier last year by the loan of a cargo bike from Laid Back Bikes. This year we have negotiated with Urban Arrow to provide us with one of their bikes at a preferential rate and are buying it with the help of the Energy Saving Trust.

The Urban Arrow, with its modular design, is one of the most versatile cargo bikes around. Although we are buying it in the family configuration, we may well buy a cargo box at a later date. When the bike is not in use for EdFoC business, we intend to make it available for hire at a competitive rate, which is part of the reason that we went for the family version. 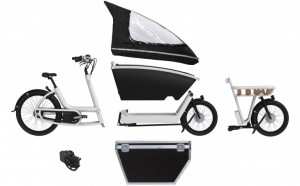 We did also consider other cargo bikes, such as the Danish Bullitt (of which there are a couple already in Edinburgh), and the German Riese & Müller Packster and Load. However, in the end we decided that Urban Arrow suited our needs best and offers the best value for money. If you would like to try out an Urban Arrow for yourself, our bike is available for hire (when we are not using it). 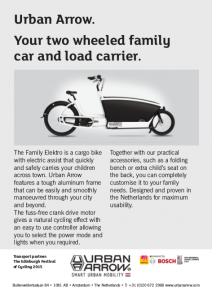